Nissim Ezekiel (1924-2004), the famous Indian-'Jew" poet, though one wonders if one should write so. Do we write Indian-Hindu poet, Indian-Muslim poet and so on and so forth. But I find this being mentioned at lot of places. Perhaps one needs to read this absolutely fabulous poem of Nissim Ezekiel, arguably the 'father' of modern India-English poetry (will they take the tag back someday?), wherein he explores his Indianness through various images that confront him with his own minor place among the minorities in India. Surely, in the context of Nissim Ezekiel, his placement as an Indian-English writer, a kind of a linguistic minority in Indian literature despite the English langauge being a tool of the powerful in India, has its own dynamics.

But what the poem hits at, and this has been one of the influential poems for me to understand and explore one's own position in the time and space that one inhabits, is how the backwardness of one's society, or country is part and parcel of one's own self and identity, and how willy-nilly, both impinge upon each other. The poem is also supposed to express the inherent motive of Nissim Ezekiel finally coming back to India from England, and start the complex life of an intellectual in India focussed on finding some space for Indian-English writings, especially, poetry.

A poet-rascal-clown was born,
The frightened child who would not eat
Or sleep, a boy of meager bone.
He never learned to fly a kite,
His borrowed top refused to spin.
I went to Roman Catholic school,
A mugging Jew among the wolves.
They told me I had killed the Christ,
That year I won the scripture prize.
A Muslim sportsman boxed my ears.I grew in terror of the strong
But undernourished Hindu lads,
Their prepositions always wrong,
Repelled me by passivity.
One noisy day I used a knife.At home on Friday nights the prayers
Were said. My morals had declined.
I heard of Yoga and of Zen.
Could 1, perhaps, be rabbi saint?
The more I searched, the less I found.Twenty two: time to go abroad.
First, the decision, then a friend
To pay the fare. Philosophy,
Poverty and Poetry, three
Companions shared my basement room.The London seasons passed me by.
I lay in bed two years alone,
And then a Woman came to tell
My willing ears I was the Son
Of Man. I knew that I had failedIn everything, a bitter thought.
So, in an English cargo ship
Taking French guns and mortar shells
To Indo China, scrubbed the decks,
And learned to laugh again at home.How to feel it home, was the point.
Some reading had been done, but what
Had I observed, except my own
Exasperation? All Hindus are
Like that, my father used to say,When someone talked too loudly, or
Knocked at the door like the Devil.
They hawked and spat. They sprawled around.
I prepared for the worst. Married,
Changed jobs, and saw myself a fool.The song of my experience sung,
I knew that all was yet to sing.
My ancestors, among the castes,
Were aliens crushing seed for bread
(The hooded bullock made his rounds).One among them fought and taught,
A Major bearing British arms.
He told my father sad stories
Of the Boer War. I dreamed that
Fierce men had bound my feet and hands.The later dreams were all of words.
I did not know that words betray
But let the poems come, and lost
That grip on things the worldly prize.
I would not suffer that again. 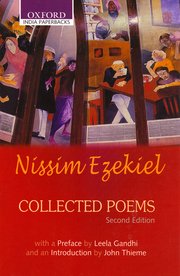 I look about me now, and try
To formulate a plainer view:
The wise survive and serve–to play
The fool, to cash in on
The inner and the outer storms.
The Indian landscape sears my eyes.
I have become a part of it
To be observed by foreigners.
They say that I am singular,
Their letters overstate the case.I have made my commitments now.
This is one: to stay where I am,
As others choose to give themselves
In some remote and backward place.
My backward place is where I am.