Léopold Sédar Senghor (1906--2001) was the legendary Senegalese poet, politician, and cultural theorist who for two decades served as the first president of Senegal (1960–1980), a country in West Africa, 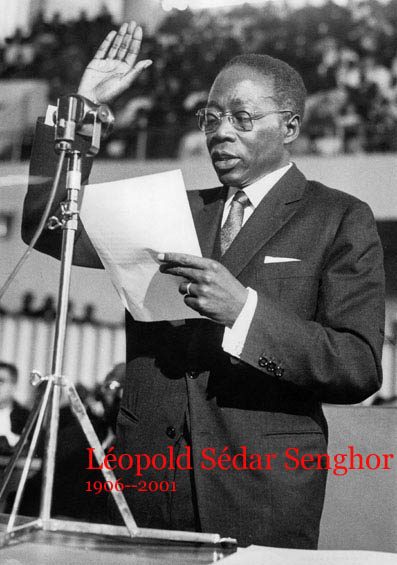 previously a French colony before attaining independence in 1960. He is credited, with  Martiniqan poet and theorist Aimé Césaire (1913–2008), and the Guianan Léon Damas (1912-1978)—the ‘Three Fathers’, as popularly referred to-- to have founded the negritude movement in the 1930s as a kind of a common black identity to counter and reject the French colonial racism. Senghor, as a negritude writer, searched for the intrinsic reality and splendour of the Black experience and portrayed African life with dignity and almost with a sense of ecstasy.

Advocating a Pan-African identity, as opposed to the white/Europe-centric one, Senghor argued that ‘far from seeing in one’s blackness inferiority, one accepts it; one lays claim to it with pride; one cultivates it lovingly’. Senghor’s negritude received a kind of an endorsement by the most influential of contemporary French thinkers, Jean Paul-Sartre, who termed it an "antiracist racism”, stating in the Preface to Senghor's 1948 anthology titled Poems of a Black Orpheus representing Francophone poetry:

“A Jew, a white among whites, can deny that he is a Jew, declaring himself a man among men. The black cannot deny that he is black nor claim for himself an abstract, colorless humanity: he is black. Thus he is driven to authenticity: insulted, enslaved, he raises himself up. He picks up the word "black" ["N*gre"] that they had thrown at him like a stone, he asserts his blackness, facing the white man, with pride.”

However, the negritude movement seemed to be riding on a double-edged theory—emphasising the colour of skin to reclaim the African identity, and thus, at the same time, dangerously pandering to the white-black racial discrimination and inequality as advocated by the White and canonical supremacists. In fact, Senghor went on to say in one of his many scholarly articles on the idea of negritude that “emotion is black as reason is Greek”—thus sounding  perilously very close to the White narrative.

As a result, later, the younger Black poets and theorists like Franz Fanon, Chinua Achebe, Wol Soyinka et al in the 1960s onward had rather complex engagement with negritude—refining it, critiquing it, and bringing out the individuality of self and the complex and plural voices that make up the idealised ‘Pan-African’ identity. In fact, Wole Soyinka, the poet-playwright-novelist from Nigeria, the first African to receive a Nobel Prize for Literature in 1986, proved to be the severest critic of the Pan-African and negritude ideas of Senghor. Soyinka, who came under criticism from critics associated with the Negritude movement for his use of European literary techniques, cautioned his Negritude critics against promoting a stereotypical dichotomy between Western rationalism and African emotionalism, and considered Negritude as a nostalgic and indiscriminate glorification of the black African past that ignores the potential benefits of modernisation. He famously wrote, "A tiger does not proclaim its tigritude. It acts."

While, Soyinka’s criticism was symptomatic of the complexity involved in developing a homogenous concept of Pan-Africanism, it further got complicated when Soyinka himself found himself at odds with the question of Arab/Islamic contribution to the making of African culture and identity as advocated by the Kenyan-born distinguished socio-political critic and statesman Ali Al'amin Mazrui. The changing dynamics of Pan-African Identity is so  very well captured by Edward W. Said in the ‘Introduction’ to his Reflections on Exile and Other Literary and Cultural Essays, who, while talking of the ‘great deal of nativism and violently  separatist thought in the anti-imperialist nationalism of mid-twentieth century’, states:

‘Thus the celebrated Nigerian writer Wole Soyinka attacks Senghor’s negritude in the early 1960s—attacks it brilliantly and resourcefully for its defeatism, its implicit concessions to European ethnocentrism and supremacist thought—and then thirty years later in his own journal Transition attacks the well-known Kenyan political theorist Ali Mazrui for not being enough of ‘pure’ African.’

Actually, Soyinka in the early 1990s, in an essay titled ‘Religion and Human Rights’ published in Index to Censorship (1988),  felt that Ali Mazrui’s immensely popular BBC’s television series The Africans: A Triple Heritage, gave prominence to the Christian and Islamic contribution to the making of African identity, and quite ironically, Soyinka talked of ‘African authenticity’ and went on to denigrate the Islamic traditions of Africa as something alien and pitched for the production of a new television series on Africa to be made ‘from a black African perspective.’ Soyinka followed up his criticism with another article titled ‘Triple Tropes of Trickery’, published in his journal Transition (1991), perhaps to which Edward Said refers to above.

Ali Mazrui, famous for his debating skills, stated in his essay Wole Soyinka as a Television Critic: A Parable of Deception in 1991, “I do not need Wole Soyinka’s stamp of confirmation that I am an African. My identity is in my blood, my ancestry, my history, my commitment, my life. If I was somebody constantly looking for approval from people who were "blacker" than me, I would have kept a low profile instead of becoming a controversial African political analyst.” He painfully asks, “Why is Soyinka taking us down this fascist path of racial quantification and genetic explanation?”

Suddenly, we find that Ali Mazuri’s concerns get aligned with those of Maulana Azad, when he, battling the similar ‘racial quantification and genetic explanation’ in India from 1930s to 1940s, famously said, “"I am a Muslim and profoundly conscious of that fact that I have inherited Islam's glorious tradition of the last thirteen hundred years. I am not prepared to lose even a small part of that legacy. The history and teachings of Islam, its art and letters, its culture and civilization are part of my wealth and it is my duty to cherish and guard them... But, with all these feelings, I have another equally deep realization born out of my life's experience, which is strengthened and not hindered by the Islamic spirit. I am equally proud of the fact that I am an Indian, an essential part of the indivisible unity of Indian nationhood, a vital factor in its total makeup, without which this noble edifice will remain incomplete. I am an essential element, which has gone to build India. I can never surrender this claim."

This debate in Africa, as in India, keeps recurring and confronting us on daily basis.

In the changing perspectives about African Identity, Senghor’s negritude, thus, has also been be seen as a kind of a Black all-encompassing humanism, a la Walt Whitman’s—without denying the revolutionary and historical role of the rise of the idea of negritude. This needs to be underlined that Senghor, as the first President of the independent Senegal for twenty years from 1960, realised the whole lot of repression and violence emanating from various African countries reeling under dictatorship and inter-ethnic strifes, and sought greater engagement with the West, which helped provide stability to the newly independent nation.

Let us then read, his beautiful and powerful poem "Prayer to Masks", published in 1945 in his poetry collection Songs of Darkness under our series KAVITA RAVIVAAR/ कविता रविवार/THE SUNDAY POEM. The poem, besides being a commentary on the historical relationship of dominant/suppressed, between Europe and Africa, brings out a black man’s longing for a spiritual and emotional state of being which the enforced inferiority and bestial repression of the colonial/white/western world has snatched from him and his contemporaries. However, in the light of the changing dynamics of debate about what constitutes African identity, here the symbol of ‘masks’ seems to acquire meanings which Senghor perhaps never intended.—Kumar Vikram

Masks! Oh Masks!
Black mask, red mask, you black and white masks,
Rectangular masks through whom the spirit breathes,
I greet you in silence!
And you too, my panterheaded ancestor.
You guard this place, that is closed to any feminine laughter, to any mortal smile.
You purify the air of eternity, here where I breathe the air of my fathers.
Masks of maskless faces, free from dimples and wrinkles.
You have composed this image, this my face that bends
over the altar of white paper.
In the name of your image, listen to me!
Now while the Africa of despotism is dying – it is the agony of a pitiable princess,
Just like Europe to whom she is connected through the
naval.
Now turn your immobile eyes towards your children who
have been called
And who sacrifice their lives like the poor man his last garment
So that hereafter we may cry ‘here’ at the rebirth of the world being the leaven that the white flour needs.
For who else would teach rhythm to the world that has
died of machines and cannons?
For who else should ejaculate the cry of joy, that arouses the dead and the wise in a new dawn?
Say, who else could return the memory of life to men with a torn hope?
They call us cotton heads, and coffee men, and oily men.
They call us men of death.
But we are the men of the dance whose feet only gain
power when they beat the hard soil.
Poem courtesy: http://allpoetry.com
at September 08, 2013