Musings at and on the India-Pakistan Partition Table

This table, where I am sitting in the photograph below, is not a usual one. It is kept at the museum of Rashtrapati Niwas of Simla, then Viceregal’s Lodge, which now houses the Indian Institute of Advanced Studies. This is the historic and tragic table on which the papers related to the partition of India into two separate countries--India and Pakistan-- in 1947 were signed following the famous ‘Simla Conference’. I visited the place in December 2008, and looking at it, I did have conflicting emotions. In fact, I did wonder--so this was the table which decided the great game of ‘Chairs’. 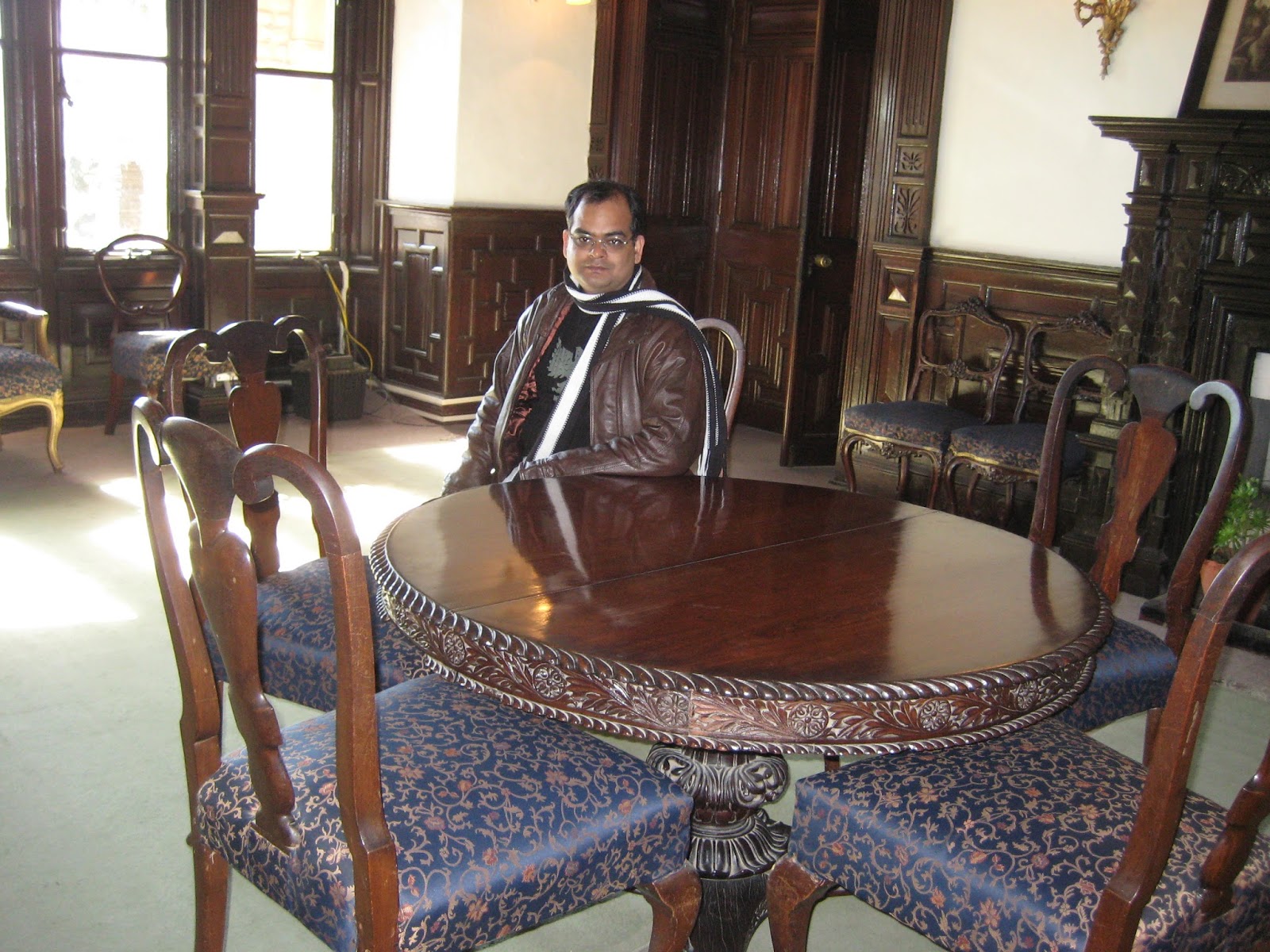 I am reminded of the famous poem-- The Table and the Chair-of Edward Lear (1812-1888) in which the Table persuades the Chair to take a walk together. The first two paras go thus:

II
Said the Chair unto the Table,
'Now you know we are not able!
'How foolishly you talk,
'When you know we cannot walk!'
Said the Table, with a sigh,
'It can do no harm to try,
'I've as many legs as you,
'Why can't we walk on two?'

Unfortunately, Lear’s poem is about a couple in love, who want to break free, whereas the Partition Table at Simla can be likened to two such persons who want to break up to become free. Hence the comparison should end here. Considering the rather elaborate, tedious, painful nature of Simla Conference, one wonders if this table served the purpose of ‘coming to the table’ well despite the fact there were many instances when the competing sides did try their best to ‘turn the tables’ onto their opponents.

In fact, table as the metaphor for dialogue and conversations has been part and parcel of human etymology. We can remember the poems like ‘Table Talk’ and ‘The Planet on the Table’ by the legendary American poet Wallace Stevens (1879-19555) in this context. In ‘The Planet on the Table’, written quite late in his life in 1954, the poet meditates upon the poetic imagination that can juxtapose and bring the entire world, as it were, on the table:

The Planet on the Table

Ariel was glad he had written his poems.
They were of a remembered time
Or of something seen that he liked.

Other makings of the sun
Were waste and welter
And the ripe shrub writhed.

His self and the sun were one
And his poems, although makings of his self,
Were no less makings of the sun.

It was not important that they survive.
What mattered was that they should bear
Some lineament or character,

Some affluence, if only half-perceived,
In the poverty of their words,
Of the planet of which they were part.
However, in the context of this Partition Table at Simla, it is more like that catastrophic act where not the planet really, but the entire Sub-continent, along with people, traditions, shared past, rivers, plants, mountains, roses were placed on the table for dissection. Birthday cakes are cut on tables, but it is on the operation table that a child is given birth and it is there where the umbilical cords are cut. And no other lines, but the opening ones from T S Eliot’s seminal poem The Love Song of J Alfred Prufrcok can aptly describe this operation at this table of Simla in the overall atmosphere of distrust, guilt and self-induced unconsciousness::
Let us go then, you and I
When the evening is spread out against the sky
Like a patient etherized upon a table
May be to see and meet that invisible patient, we need not visit Simla, because its uncured wounds would keep troubling us at our tables of learning and remembrances.
In fact, we never realise how burdensome we make our tables, perhaps in order to make our chairs cosy and comfortable. No wonder, other than the meaning attached to furniture, table also implies information and database, and one of the first things we learn as a child is the periodic table, which has had its own music and rhyme chasing us and helping us out throughout our lives in difficult countable moments. I would, then, end with a fine poem titled Table, by a Turkish poet Edip Cansever (1928-1986), which tells a lot about how our lives are spent on bringing things on the table of expectations and disillusionment:
A man filled with the gladness of living
Put his keys on the table,
Put flowers in a copper bowl there.
He put his eggs and milk on the table.
He put there the light that came in through the window,
Sounds of a bicycle, sound of a spinning wheel.
The softness of bread and weather he put there.
On the table the man put
Things that happened in his mind.
What he wanted to do in life,
He put that there.
Those he loved, those he didn't love,
The man put them on the table too.
Three times three make nine:
The man put nine on the table.
He was next to the window next to the sky;
He reached out and placed on the table endlessness.
So many days he had wanted to drink a beer!
He put on the table the pouring of that beer.
He placed there his sleep and his wakefulness;
His hunger and his fullness he placed there.
Now that's what I call a table!
It didn't complain at all about the load.
It wobbled once or twice, then stood firm.
The man kept piling things on.
(Table by Edip Cansever is courtesy: http://www-personal.umich.edu/~rwtill/Poems/table.html, University of Michigan)