Human civilization across time and space has seen mass violence on various scales that have left indelible imprint on the way we think and act now. The poem September 1, 1939, written by the celebrated poet Anglo-American poet W H Auden (21 February 1907 – 29 September 1973)), on the occasion of the outbreak of World War II with the invasion of Poland by Hitler’s German army causing unprecedented violence and mass murders, is one to which thinking people have turned to take ‘lessons’, to grope for sanity in a civilized society. It was first published in The New Republic issue of 18 October 1939, and was first published in book form in Auden's collection Another Time (1940).  Among other things, the juxtaposition of individual frustrations and failures of 'psychopathic god' (read Hitler or Hitler-like figures) with those on the social plane causing untold misery to humanity is something very striking--even though one of the last lines 'We must love one another or die' seems a too romantic and simple resolution of such a complex juxtaposition. It may be instructing to go back to the poem once again in our times.--KV
September 1, 1939

I sit in one of the dives
On Fifty-second Street
Uncertain and afraid
As the clever hopes expire
Of a low dishonest decade;
Waves of anger and fear
Circulate over the bright
And darkened lands of the earth,
Obsessing our private lives;
The unmentionable odour of death
Offends the September night.

Accurate scholarship can
Unearth the whole offence
From Luther until now
That has driven a culture mad,
Find what occurred at Linz,
Find what huge imago made
A psychopathic god:
I and the public know
What all schoolchildren learn,
Those to whom evil is done
Do evil in return.

Exiled Thucydides knew
All that a speech can say
About Democracy,
And what dictators do,
The elderly rubbish they talk
To an apathetic grave;
Analysed all in his book,
The enlightenment driven away,
The habit-forming pain,
Mismanagement and grief:
We must suffer them all again. 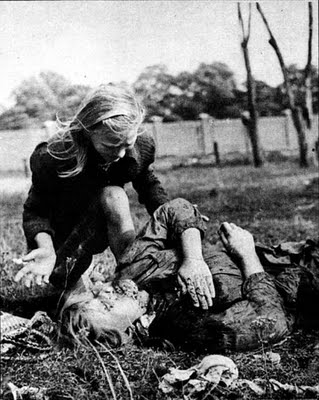 Into this neutral air
Where blind skyscrapers use
Their full height to proclaim
The strength of Collective Man,
Each language pours its vain
Competitive excuse:
But who can live for long
In an euphoric dream;
Out of the mirror they stare,
Imperialism's face
And the international wrong.

Faces along the bar
Cling to their average day:
The lights must never go out,
The music must always play,
All the conventions conspire
To make this fort assume
The furniture of home;
Lest we should see where we are,
Lost in a haunted wood,
Children afraid of the night
Who have never been happy or good.


The windiest militant trash
Important Persons shout
Is not so crude as our wish:
What mad Nijinsky wrote
About Diaghilev
Is true of the normal heart;
For the error bred in the bone
Of each woman and each man
Craves what it cannot have,
Not universal love
But to be loved alone.

From the conservative dark
Into the ethical life
The dense commuters come,
Repeating their morning vow;
"I
will
be true to the wife,
I'll concentrate more on my work,"
And helpless governors wake
To resume their compulsory game:
Who can release them now,
Who can reach the deaf,
Who can speak for the dumb?

Defenceless under the night
Our world in stupor lies;
Yet, dotted everywhere,
Ironic points of light
Flash out wherever the Just
Exchange their messages:
May I, composed like them
Of Eros and of dust,
Beleaguered by the same
Negation and despair,
Show an affirming flame.